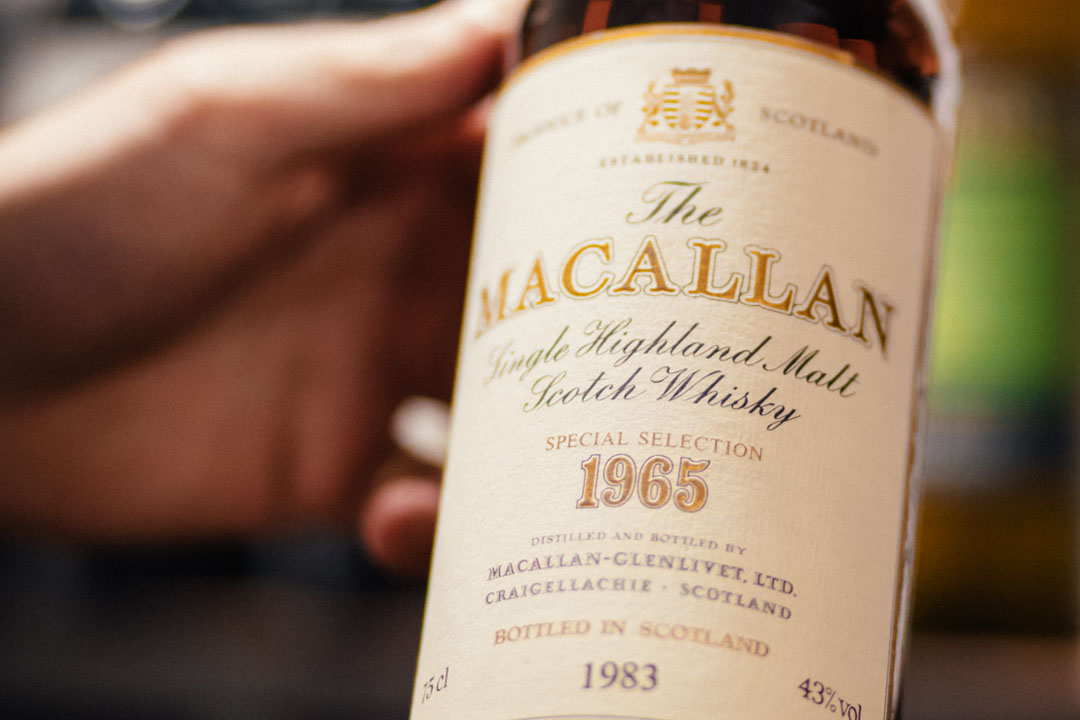 One of the most highly esteemed whisky brands of all time, and arguably the most sought after by collectors, Macallan ranks as the third-largest selling single malt globally and the second-largest by value.

The Macallan distillery can be found in Craigellachie in the striking Scottish Highlands, perched overlooking the River Spey. The Speyside area produces two distinctive types of whisky: one is rich, fruity and sweet and the other (into which category Macallan falls) is lighter, with notes of grass and heather. What makes Macallan extra special is its rich history, unique production values and approachable flavour.

A testament to its enduring popularity, 700,000 bottles are snapped up by buyers each year and it has a history of fetching astounding prices at auction.

Now a household name, Macallan had a humble start. Just a year after distilling was legalized by the Scottish Excise Act in 1824, it was a lowly school teacher and barley farmer called Alexander Reid who founded the distillery.

Drawing on Reid’s farming roots and the history of the estate, the name stems from the Gaelic for fertile land, ‘magh’, and ‘Ellan’, in honour of the 18th-century monk St Fillian who had close links with a church previously situated on the estate.Pictured on Macallan labels to this day is Easter Elchies House on the distillery’s grounds — originally Reid’s home.

Alexander Reid died in 1848, and the distillery changed ownership several times until it was bought by Roderick Kemp in 1892. The Kemp family were to own Macallan for decades, successfully finding new capital for investment and expansion in the early 1960s.

Interestingly, they were one of the first distillers to understand the appeal of single malt whisky. Under the Kemps, Macallan became known not just for the quality of their blends but famous for their single-malt in its own right. And that’s not the only mark the family left: Roderick Kemp allegedly still haunts the estate.

In 1996 Highland Distillers took over, but in 1999 they were bought out by the Edrington group who still own Macallan today. In 2008, the distillery boosted its production capacity with a second production house and new warehouses. A brand new distillery and visitor centre was opened in June 2018.

Macallan is scrupulous about its casks. They even have a role dedicated to the sourcing of barrels – Master of Wood. Current Master of Wood Stuart Macpherson oversees a complex process of identifying and felling oaks from the forests of northern Spain and air-drying the staves before they’re taken south for further drying. This process ensures moisture is reduced, and a further 18-months of seasoning before they’re shipped to Scotland completes the process. Unlike other distilleries, Macallan use sherry casks instead of American oaks to ensure a richness of flavour.

Another quirk of Macallan production is their copper-pot stills. They’re notably small and so remarkable they even made it onto a Scottish £10 note. Their stills are diminutive for good reason: when the surface area contact between the copper and alcohol is smaller, the heat of the process increases; as a result, you get a more intense distillate. To further ensure richness and depth, Macallan then only uses 16% of this distillate in the final whisky.

A knack for breaking records

A 6-litre crystal decanter of Macallan Imperiale ‘M’ became the world’s priciest whisky when it sold for $628, 205 at auction in Hong Kong. This record was broken by Macallan again in 2018 when a bottle of Macallan Valerio Adami 1926 went for an astounding £848,000 at auction in Edinburgh.

Not many people know this, but the rich caramel hue of most whiskies is the result of artificial colouring added by the distillery. Macallan is one of a handful of producers who take a natural approach: their whiskies are coloured only by the wood in which they’re matured.

As a consequence, Macallan whisky is pale and tasters are often surprised to discover it packs a significant dried-fruit punch. Perfect for anyone who struggles with the peaty flavour of most scotches, you can also expect notes of toffee, sherry, spice and a pleasant nuttiness — an overall delicate and smooth character.

If you’re looking to sell Macallan don’t hesitate to get in touch with our expert team at The London Wine Cellar. You can call us on 020 7377 8097, fill out our online whisky valuation form or just drop by our London office for an instant valuation.