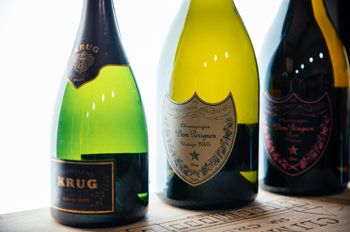 Since Krug was established in 1843, it’s narrowed its focus to producing only prestige and specialised Champagnes, and only using small oak casks. Notably, it’s the only estate still to produce Champagne like this, and it’s arguably one of the many things that make its flavour so special: honey and nuts, refreshing acidity and a long finish typically characterise every vintage. Interestingly, the average yearly production of Krug Grande Cuvee is well-kept secret, though estimates sit at around 425,000 cases annually.

1. There have been six generations of Krugs

Joseph Krug was born in Mainz in 1800, the son of a butcher. In 1834 he moved to Paris, where he worked as a bookkeeper. He spent 8 years with Champagne Jacquesson, where despite being an accountant, he learned all about Champagne; by 1840 he was apparently already blending it for at least one other house!

Joseph established Krug in 1843, and he was succeeded in 1866 by his son Paul. In 1866 the House moved into the premises in Reims it still occupies to this day. In 1910 Paul’s son Joseph Krug II took over. But when he was taken prisoner during the First World War, his wife Jeanne had to step in. After the war, Joseph II’s nephew Jean Seydoux became a joint manager.

Paul Krug II, Joseph II’s son, went on to lead Krug between 1959—77. He was joined in the 1960s by his sons Henri and Remi, who innovated production and extended the range of Krug Champagnes. In 1999 the estate was absorbed by LVMH, and in 2007 Henri and Remi finally stepped down from management—though they’re still on the tasting committee. In 2009, Olivier Krug, Henri’s son, became the current House director. Eric Lebel is Krug’s cellarmaster and winemaker.

It’s long been a gripe amid Champagne buyers that if they’re not purchasing a vintage year, they have no way of telling exactly what’s in the bottle. This is because producers typically design a new blend each year. To counteract this problem, Krug came up with an ingenious solution: every bottle of Krug’s non-vintage Grande Cuvée since 2012 has a special ID code that, when looked up on their website or scanned with your smartphone, will tell you everything you need to know about that specific blend.

3. Each Krug Champagne has to pass a taste test

Krug is known for the expert alchemy with which they blend wines. Vines are separated into different plots and the resulting wine taste-tested individually before blending. If it fails the taste test, it gets sold on. Wine is then vinified in wooden casks where malolactic fermentation takes place; it’s this long-ageing process that lends Krug Champagnes their rich and complex flavour.

4. All but two of Krug’s wines are vintage

Many people are surprised to learn that Krug’s Grande Cuvée is not, in fact, a vintage Champagne; in this, Krug bucks the trend. While most estates believe that vintage cuvées are more prestigious, Krug’s is a blend of more than 120 different wines from over 10 vintages! In this way, Krug argues it’s able to flaunt the best of every one of its reserves. It’s certainly very different to most cuvées: deep gold in colour, and rich and complex on the tongue, with notes of dried fruit and brioche.

The second of its non-vintage offerings is its rosé, which gets its beautiful blush from skin-fermented Pinot Noir. This creatively blended wine was originally born from an experiment by the two Krug brothers Henri and Rémi sometime in the 1970s. It’s known for its smooth taste, with hints of exotic spice and wild berries.

5. Krug Champagnes are aged for an average of 10 years

Krug ages its vintage Champagne varieties for a few extra years than most. They sit in the Krug cellars for an average of 10 years, which is notably longer than the legal requirement of 3 years for ageing Champagnes.

And they don’t just all get released at the same time: Krug holds back a percentage of the bottles. They remain stored in the perfect conditions of the Krug cellars, sampled by tasters at predetermined intervals. When they’re deemed ready, Krug will release these special bottles—known as the ‘Krug Collection’—for purchase. They most recently released their 1990 vintage.

To learn more about your bottles of Krug and for a professional assessment of their value, get in touch with us at The London Wine Cellar. Call on 020 7377 8097, email us at wine@thelondonwinecellar.com or simply drop into our London cellar for a chat.